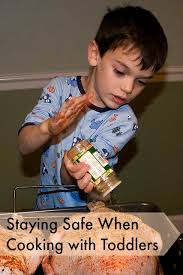 The Milwaukee Journal Sentinel reports a toddler was injured in a cooking fire.  According to the report by Meg Jones, “A one-year-old boy was burned in a house fire Monday evening. When firefighters arrived at the two-family home around 7:30 p.m., the child and his mother were already outside the home in the 1700 block of W. Capitol Drive, said Battalion 2 Chief Kenton Kais. The boy suffered first- and second-degree burns on his arms and right leg and was taken to Children’s Hospital of Wisconsin, where he was expected to recover.The blaze was caused by a cooking fire. Fire crews were on the scene for 1 1/2 hours.” Create a three-foot “child-free zone” around the stove. Keep children and pets away from the stove while cooking to prevent burns and scalds