More Cooking Fires on Thanksgiving Than Any Other Day

More Cooking Fires Reported on Thanksgiving than Any Other Day

Guardian Safety Solutions International warns families that Thanksgiving can be hazardous to their health.  About 45 house fires are reported every hour in the U.S., and 60 percent of apartment fires are started by cooking equipment.  Sadly, children and the elderly make up the greatest national percentage of injury and death due to household fires.

“Thanksgiving is a special day with relatives, but answering the door to welcome guests can distract even the most careful cook,” said Paul Rouse, GSSI administrative officer. “Alcohol during Thanksgiving celebrations can also add to cooking inattentiveness.  Next thing you know, a fire starts consuming the stove, curtains and other flammable material in the kitchen.”  The popularity of turkey deep fryers has added another hazard to the celebration.  The cooking oil temperature is extremely hot.  Rouse said that they should be used as far from the house as possible.  “It’s important to note that not one turkey fryer has been certified as safe by Underwriters Laboratories,” Rouse added.  You can read more here.

Fire Safety for the Holidays

TV station WAFF 48 in Alabama reports on how the holidays are one of the most dangerous times of year for household fires.

According to the report, “Cooking fires lead to more destruction than any other fires that we deal with,” said Fire Prevention Officer Dan Wilkerson. “One of the main reasons is because it’s the most common way that a fire could start in your home. Cooking fires are our number one cause of fires in the nation. Not only in Huntsville, across the nation.”

Wilkerson said that when cooking make sure you have a timer on to remind you of your meal and keep the handles of your pots and pans out of the reach of children. He also keep a fire extinguisher handy just in case.

heating grease and fell asleep on the couch. The grease then ignited causing smoke alarms to go off in an adjacent apartment. Neighbors called 911 but it was too late to save the life of the resident who was taken to Wilson Medical Center and pronounced dead.  Many lives are lost each year from unattended cooking fires.  Never leave the room when you are cooking.  If you must, turn off the stove.  GSSI’s range top suppression system would have saved this man’s life.  Read more here. 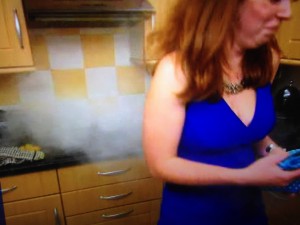 A UK cooking how host almost burned down her own set in an episode of “Come Dine With Me in Northamptonshire.” Lauren Oxlade was showing off her skills when she left her oven mitts too close to the flames. ” According to reports, “She went into the evening hoping her passion for cooking and ‘burning’ desire to win would bag her the £1,000 cash prize.

Paul Rouse, with GuardianSSI said, “The Guardian is designed to detect and extinguish cooking fires and prevent re-ignition in private homes, apartments, senior housing, college campuses, hospitals and even TV production locations!”  Even older kitchens can be retrofitted.

Alma Michigan Kindergarten kids learned all about cooking safety according to the Morning Sun during Fire Prevention Week.  According to the Sun, “Volunteer firefighters spread the word that more fires start in the kitchen than in any other part of the home and teaching the students how to keep cooking fires from starting in the first place. The volunteer firefighters visited four schools and talked to approximately 725 elementary students.”