The Inquisitor reports that Isaiah Cox popped the marriage question to his girlfriend which also happened to be her birthday.  To celebrate, he wanted to make her special breakfast.  But a nasty grease fire started in the kitchen and the house and proposal went up in smoke. 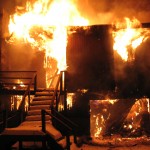 The South Jersey Times reports that he heard his son crying and went to check on him. Cox claims he was only gone for a minute but when he returned to the kitchen, the cabinets were on fire. While there was a fire extinguisher, he got confused and forgot to use it.

The South Jersey Times says, “the Millville Fire Chief Kurt Hess notes that the fire took quite some time to finally get under control. The firefighters were dispatched to the home at around 10:15 a.m. and the fire was not under control until 1 p.m.”  Read more here.